Having a problem with UltiAnalytics? Check out the FAQ that follows.
If you still have a question (or suggestion) send us a note. 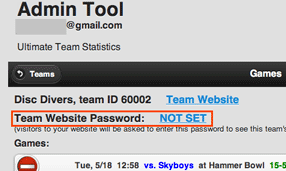 Alternatively, you can use the app's correction feature. Just find the event (pick "Events" from the Game view or swipe up from the Action view to see events) and select it. You can change the player(s) for event and make other changes for some events (e.g., changing from drop to throwaway, or OB pull to inbounds pull). 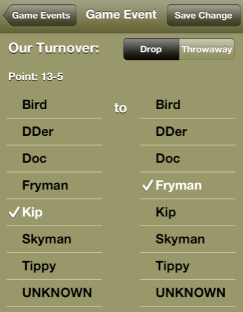 How do I do a substitution?
If you need to record a substitution go to the Line view just like you would to set/correct the players on the field. If you go this view after an event has been recorded for a point a "Substitution" button will appear. If you are really doing a substitution (as opposed to correcting) then click this button. The Substitution view will be presented.
How are the statistics calculated?
Go to >> UltiAnalytics Calculations
How do I record Callahan, Stall, and Penalty?
UltiAnalytics allows you to record callahans for your team by long-pressing* the D button. Likewise you can record your team's turnovers caused by stall or misc. penalty by long-pressing the Throwaway button.

* to long-press tap and hold the button. A menu will appear with choices.

I deleted a team and/or game from my mobile device but it is still on the website. How do I delete it from the website?
Use your admin web site to delete the team (or game) from the website. (http://www.ultianalytics.com/team/admin).
The admin site says one of my players is "inactive". What does this mean?
A player name is inactive if the name is included in game(s) data but the name is no longer in the current list of players on the team.
There are a number of scenarios that create an inactive player name. For example, a player is no longer on the team (or no longer playing and you would like to stop seeing his/her name in the line view). Or it might be the result of some player re-naming. For example you:
Both Sam and Sammy will now appear in stats. Sam is considered inactive.
You can use the admin site to correct the data by merging Sam into Sammy.
NOTE: A designation of "inactive" does not affect whether you can merge a player. The designation exists simply to let you know that the player is not on the current team.
How can I move/copy a game from one team to another or merge teams? Can I send the game to another person who takes stats with UltiAnalytics?
UltiAnalytics allows you to export and import games using the admin web site (http://www.ultianalytics.com/team/admin).
How do I change the twitter account used by iUltimate (iOS app)?
The twitter accounts get registered via the iOS settings. Go to Settings, Twitter (there may be more than one twitter in settings…pick the first one). iUltimate refers to one of the registered iOS twitter accounts. You should be able to pick a different one than your personal twitter account if you have registered it.
On the "recent tweets" view I see "SKIPPED...TO MANY RECENT TWEETS". What causes that?
Unfortunately Twitter has limits to how many tweets it will accept from a user during the day. And worse, once it reaches those limits it rejects all messages for an hour or two. To keep you from exceeding your "tweet budget" UltiAnalytics governs the tweets and skips tweets that are not considered critical.
On the "recent tweets" view I see "REJECTED BY TWITTER". What causes that?
This is usually the result of duplicate messages which Twitter rejects.
How do I merge, rename, or delete players?
UltiAnalytics allows you to manage players using the admin web site (http://www.ultianalytics.com/team/admin). From the team's Players tab you can: Once you have completed the maintenance you should download the game to your mobile device to ensure the changes are applied there as well (otherwise, the next upload of this game will undo your changes).
Can I use a player's full name on the website?
Yes, UltiAnalytics allows you to set player full names using the admin web site (http://www.ultianalytics.com/team/admin). Go to team's Players tab and choose rename for each player to set their first and last name. These names are only used on the website. You will not see them on your mobile device.
How to I set the season for a team?
UltiAnalytics recommends you create separate teams for each season. You can copy a team by using the UltiAnalytis admin tool: (http://www.ultianalytics.com/team/admin).
If you already have one team with 2 seasons and you would like to split it then follow these steps (assume your team is called Discdogs which has 2013 and 2014 games):
On your iPhone or Android device:
On the admin site (http://www.ultianalytics.com/team/admin):
On your iPhone or Android device:
How to I move my games to another google account?
You can move the games you have created to another google account. For example, you have created games under your own google account but would like move the games to a different account so that teammates can share stat-taking and admin duties for the team.
Google account signoff on iOS mobile app: 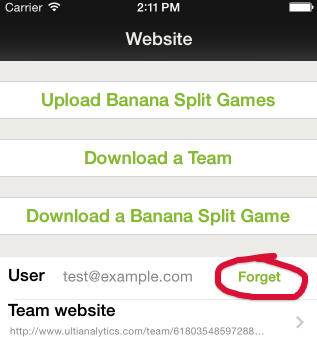 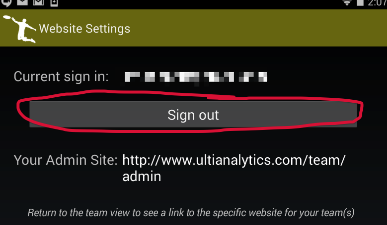